Featured article at https://therapeuticreiki.com, one in a series on Crystal Healing.

Tiger eye, also called tigers eye or tiger’s eye, is a chatoyant gemstone and the planetary stone for Gemini (May 21-Jun. 20). Traditionally it is considered as the ninth wedding anniversary gift.

Tiger Eye is asbestos that has been replaced with iron-bearing Quartz, leaving the fibrous appearance behind and creating the eye effect. This is called the chatoyant effect or chatoyancy. It is therefore a member of the quartz group of chalcedonies. Chatoyancy results in a changeable silky luster as light is reflected within the thin parallel fibrous bands. This effect is due to the fibrous structure of the material. 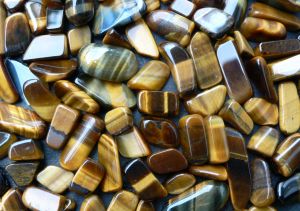 Looking at the chemical composition of Tiger Eye, it is asbestos that has been replaced by Quartz. The yellow/brown coloring is provided by Limonite, an iron mineral. It is sometimes a component of massive Tiger Iron deposits, as found in Australia. Tiger Eye measures 7.0 on the Moh’s Hardness Scale. Most of the modern day Tiger eye comes from Australia and China. Tiger’s eye is mined mostly in Western Australia, South Africa, USA, Canada, India, Namibia, and Burma.

Beliefs and traditions
According to legend wearing tiger’s eye (which is a form of quartz) is beneficial for health and spiritual well being. Legend also says it is a psychic protector, great for business, and helps to achieve clarity.

Tiger Eye also has mystical properties associated with it. It is believed that wearing Tiger Eye Jewelry brings good fortune gives protection from the “Evil Eye”.

A golden brown gem, Tiger Eye is thought to be ruled by the life-giving Sun and so is thought to bring courage during difficult times. Roman soldiers wore Tiger Eye during battle for protection.

Varieties of Tiger Eye
Tiger Eye comes in several colors, the most common being golden brown. A rare variety of the stone is blue/gray, which is called Falcons Eye or Hawk’s Eye. Red Tiger Eye is often heat-treated and sometimes called Cherry Tiger Eye. It is usually mentioned as bringing luck and wealth. It is at times used in spells. The golden variety is an important gemstone for the 3rd Chakra or Navel Chakra.

The Blue/Gray variety (Hawk’s Eye or Falcon’s Eye) is said to give the ability to see the complete truth and forgive without the crippling effect of emotion. This is considered the height of Christ Consciousness and therefore vibrates to the 6th Chakra and above.

Red Tiger Eye is said to improve the ability to speak and even give the wearer a desire to orate. It is believed to vibrate to the Throat Chakra (5th).

Tiger iron is another variety composed of tiger’s eye, red jasper and black hematite. The rippled wavy bands of color often resemble a scenic view. This type of tiger’s eye is only found in one region of Australia, thus the name. Because the minerals in this stone are of varying hardness, it is difficult to polish without under cutting. Tiger Iron deposits, are found in Australia.