Timing is everything. Yesterday, I had the good fortune of being at the right place at the right time. Together with a quarter million French people, I managed to participate in the public mass held in Paris that morning by pope Benedict XVI. I feel privileged to have been able to do so. It was an unusually calming and healing experience. 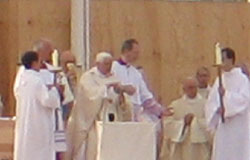 Throughout the mass, I felt there were many angels present. I know I was purified during the mass, and so were many others. The result: a feeling of inner strength and peacefulness. 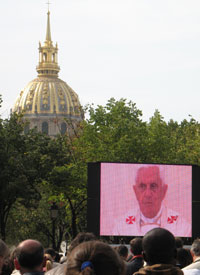 There was a very good feeling of ‘oneness’ amongst the community throughout the ceremony. 250,000 people, all eager to see the pope. Yet, they were friendly, patient and polite, letting others go ahead first instead of pushing their way in. It was kind of amazing. Beyond this, the event was extremely well-organized with many volunteers which brought a sense of safety and care despite the large numbers present.

The German-born pope held the entire mass, including his address, in French. In the sermon, he set out that the passion for possessions, power and money diverts man from his true end, from the joy of living eternally with God. The pope aimed to help the French Catholics find their way back to the church and spirituality. French Catholics show one of the highest rates of non-attendance in Europe: 79% of French citizens no longer attend Sunday Mass.

Personally, I have to agree that the habit of ‘buying things’ can be a strong one. Now detoxifying from this life-long habit, I find new time, interest and emotional energy freeing up for other matters.

Being responsible with personal power and money is a good thing. Many people are working on this. However, intense hunger for power and money can be a cover-up for fear. Fear of not being provided for. But we do not need this fear. Anyone who has hit ‘rock bottom’ once, knows that we are provided for, at all times.

It always works. A fellow human, who understand oneness on some level, helps you out in times of crisis.

And likewise, it is through your heart and hands that the Divine Essence manifests.

“The power of love is stronger than the evil which threatens us.”
~ Pope Benedict XVI