A good part of Rome is taken up by the holy land of the Vatican city. However, equally large, if not a larger portion of people’s minds here, is taken up by the virtues of Pope John Paul II ((18 May 1920 – 2 April 2005), who is to be beatified tomorrow morning, Sunday May 1. 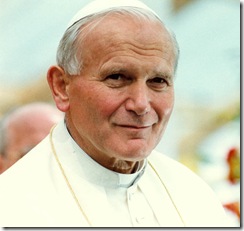 Despite the fact that he passed away 6 years ago, in the minds of many, Pope John Paul II still remains the face of the Catholic faith. Many people I know here in Italy are still particularly close to him; Even those who do not frequent the church every Sunday.

It was his personal qualities that made him a spiritual guide for 1.1 billion Catholics in the world, and perhaps for non-Catholics also. This pope’s popularity has been based on his particular loving nature and the fact that he offered people hope and a connection to God. Many people consider their lives being changed by Pope John Paul II:

As part of his calling, he canonized a great number of people, again, many more than his predecessors.  Recognizing saints is a moral direction that shows people that virtues will indeed be recognized, sooner or later.

John Paul II was one of the most international world leaders, and I believe that his international openness significantly contributed to his overall popularity.  He was the only Polish pope, and the first non-Italian since the Dutch pope, Adrian VI, in the 1520s. During his reign, John Paul II  traveled extensively and visiting over 100 countries. This is more than any of his predecessors.   He also strengthened the  Catholic faith in the Third World. His ability with languages was amazing, and beyond his native Polish language, he was fluent in Italian, French, German, English, Spanish, Croatian, Portuguese, Russian and Latin.

John Paul II reigned as the 264th Pope of the Roman Catholic Church for nearly 27 years later.  His  pontificate was the 2nd longest, after the 32-year reign of Pius IX.

The Process of Becoming a Saint 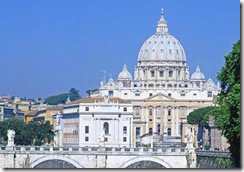 The process of becoming recognized as a saint is a lengthy one, albeit that in recent times, it has shortened from taking centuries to just a few years.  It was in fact John Paul II himself who shortened that process, so that now a mere 6 years after his death, he is already beatified.

The act of beatification is the one but final step in the process of becoming recognized as a saint.   The beatification ceremony tomorrow will be a Mass and day-long prayers beside John Paul’s coffin in Rome.

Learn how to bring Saints into your daily life