Sunday I went to see a major monument dedicated to Archangel Michael in Rome and I want to share this experience with you, as it was special.

The monument is the ‘Castel Sant’Angelo’. It is a huge 5 story, sacred geometrical building in the center of Rome. It’s origins are regal, while it’s current dedication is divine. 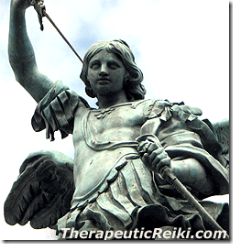 In 590, the pope of that time led a major procession, prayed to the Virgin Mary to please end the plague that had been destroying Rome at that time.  Then a huge angel appeared over this particular building in the sky. It was Archangel Michael. holding his sword in a symbolic position indicating that  the prayer was heard and the plague ended.

Mother Mary is sometimes called the queen of all angels, and Archangel Michael is the chief in command over all archangels and other angels. 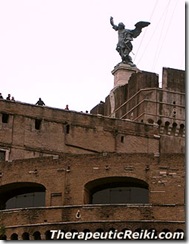 First, a beautiful chapel was built inside the building. Then, it’s prior warrior statue on top was replaced with an enormous statue of Archangel  Michael. As well, many of the frescos in the building celebrate Archangel Michael. An inner courtyard also features a statue of the Michael.

Yes, some remnants of the prior royal mausoleum still remain.  As its subsequently built warrior walls still remain. And the walkway towards the Vatican, which was built to protect the pope when he had control over the building, is still there. However, today, the single honor of this gigantic building goes to Archangel Michael. 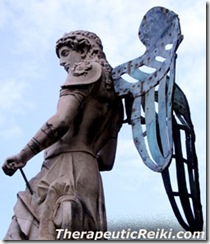 However, when  I was on top of the building, on the foot of the angel, the Beatles song, ‘Let it Be’, popped in my mind.

The song happens to be stored in our cell phone, and so, when I replayed it, I felt like, for the first time, I REALLY heard it, and was reminded, that while there was no monumental sculpture celebrating her here, Mother Mary was omnipresent and I was reminded that SHE had been the one who had sent Archangel Michael down to conquer the plague.

I was so moved by the song, and no doubt Mary’s presents and message to me and now also to you, that it moved me to tears. I felt as if all my personal challenges were eased and my mind put to rest.

So, like it did to me yesterday, may this song brings solace to your day, calmness in your heart, and trust in your mind.

‘Let it be’ by the Beatles – Original Lyrics

And when the night is cloudy, there is still a light, that shines on me,
shine until tomorrow, let it be.
I wake up to the sound of music, mother Mary comes to me,
speaking words of wisdom, let it be.

Have a blessed day, and know that you too can ask the Virgin Mary and Archangel Michael for help to heal your world. Mother Mary ‘helps all mothers and children in particular. Her presence is of the warm loving mother who also prods you to do what’s good for you. Archangel Michael helps with fear, offering courage, and with finding and following your direction in life. He is a great way-finder and a great help on your way.