End of the World Postponed

Really: who says that the Mayan calendar literally referred to the end of the world, rather than the time of an era? I personally believe the latter is the case.

But the article titled ‘End of the World Postponed’ by Yahoo News today makes nonetheless a good read. Here’s a brief summary, below which you’ll find a link to the news article:

good news:Mayan “Long Count” calendar may not end on Dec. 21, 2012 (and, by extension, the world may not end along with it).
bad news: if the calendar doesn’t end in December 2012, no one knows when it actually will. 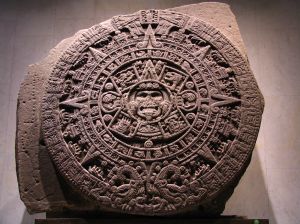 But according to Aldana, Lounsbury’s evidence is far from irrefutable:

What’s your take on this matter? Are you prepared for 2012? What does that mean to you?

The Mayan calendars are methods of measuring time that were developed by the ancient Mayans. They are rather impressive and have evoked the curiosity of many astronomy and/or archaeology
experts. They have been studied extensively and they appear to be interpreted well. However, there is one calendar, developed by the ancient Mayans that has caused a great deal of controversy and frustration. The interpretation of the Mayan Long Calendar has left a surprisingly widespread and significant number of people on the cusp of panic.

The so-called “Maya (or Mayan) Calendar” is actually only one of four calendars developed by the ancient Mayans. The calendar that is widely known as the “Maya Calendar” is actually the Mayan Long Count Calendar. All of the Mayan calendars served a purpose. The purpose of the Long Count Calendar was to measure time well into the future or past. Quite simply, it was used to measure hundreds or thousands of years, as opposed to the days, weeks and months in our modern calendars. The Mayan Long Count Calendar is round and covered in ancient Mesoamerican hieroglyphs. Each of these hieroglyphs represents a specific time frame. These are arranged to count the passage of time in multiples of 13 and 20.