One of my Reiki students recently requested that I write some more personal blog entries. I’d thought to honor that request with this article on how I use spiritual guidance in my daily life. I often mention that I am guided in many things that I do. So, let me tell you about the events of my day today and the great healing thoughts and insights I’ve received along the way.

As many people know by now, it is my plan to emigrate to Italy in a few months. Part of this process is selling my car now. This is kind of a ‘big thing to do’ and so I’d already put it off for a month. Beyond ‘looking upto’ the sales process, perhaps I had not been ready before now to let my car go.

You should know that my car is not just any car. My white convertible with sexy black leather heated seats and power-everything, well, it is my beloved toy, really, rather than my car. And particularly in the current blissful sunshine, but really year round, it sure is a joy to drive. 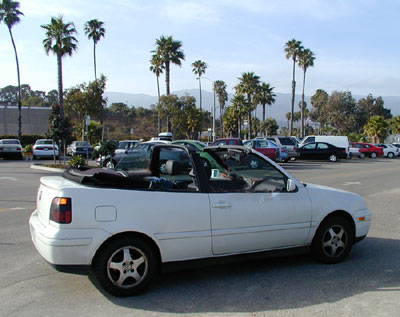 It’s a magical toy too. While I drive it everywhere daily, miraculously it keeps on having extra-ordinary low mileage. And while I drive and drive, I hardly ever manage to spend more than $40 on gas when I fill up every other week or so. While avoiding ozone-depleting actions are on my mind these days, I drive still relatively guilt-free having such good mileage. So, you can imagine why I’ve been hanging on to my car for as long as I have.

Yesterday, to help me shift and create a new reality, I did a mental visualization ritual whereby I saw the car being sold to someone who would love it. I visualized a perfect outcome, and how it all would be so fast and easy to realize. I took out all the ‘it’s a big thing to do’ feelings of dread and replaced them with joy. I visualized that not only I but everybody would be happy.

Today I commenced the actual physical process of letting-go off my car. With a coffee and keys in one hand and a statue of a dancing Shiva in another, I walked down to my car.

First, I placed Shiva on top of the car, but he wanted to be in the driver seat. (Don’t argue with deities. Do as you’re told. 🙂 That’s my rule at least.)

Next, I started taking out personal belongings. Even though I had previously considered the car to be already ’empty’ except for the trunk, I found many wonderful treasures in my car. By looking for meaning, signs and symbols, I had fun retrieving my personal treasures. Finding meaning in everyday activities offers opportunity to love the process of life.

The first thing I found is a shiny, nice, new quarter. Ah, a straight money symbol. This car will give money, what a wonderful affirmation. Next I found a cute red gem sticker, to brighten up gray days. What would that symbol mean? A new gem of a person will passionately love his / her new vehicle? … Possible.

Then, I spot a pair of all-seeing stick-on eyes. These are the kind of eyes that can look in all directions when you shake them. When you put the two stickers together, they remind me of Nepalese Buddha eyes. Although this set is a Western child craft version, I can see the all-seeing eyes of God or Buddha at work just the same. I give thanks for the reminder and comfort of knowing that I’m not alone in doing this. Divine order is here. It will all work out fine.

These three things are all that I found in the center console tray. Now, let’s have a look what’s under the car seats. I put my hand under the right seat and find a stiff, rolled up piece of paper. Rather than just trashing it, something tells me to open it up. Ahhh. It turns out there are two papers, one rolled into the other. When I tell you what the papers say, you can see why ‘the voice in me’ told me to open them up!

Om mani padme hum’ is probably the most famous mantra in Buddhism and Hinduism, the six-syllableled mantra of the Budhisattva of compassion, Avalokiteshvara (Sanskrit, Chenrezig in Tibetan). The mantra is particularly associated with the four-armed Shadakshari form of Avalokiteshvara.

The Dalai Lama is said to be an reincarnation of Avalokiteshvara, so the mantra is especially revered by his devotees.

“It is very good to recite the mantra Om Mani Padme Hum, but while you are doing it, you should be thinking about its meaning, for the meaning of the six syllables is great and vast….The first, OM symbolizes the practitioner’s impure body, speech and mind; they also symbolize the pure exacted body, speech and mind of a Buddha.

The path is indicated by the next syllables, Mani, meaning, Jewel, symbolized the factors of method, the altruistic intention to become enlightened, compassion and love.

Purity must be achieved by an indivisible unity of method and wisdom, symbolized by the final syllable Hum, which indicates indivisibility.

Thus, the six syllables, om mani padme hum, mean that in dependence on the practice of a path which is an indivisible union of method and wisdom, you can transform your impure body, speech and mind into the pure exalted body, speech and mind of a Buddha”. ~ H.H. The 14th Dalai Lama, Tenzin Gyatzo, Om Mani Padme Hum.

If that wasn’t enough of a message to stay focused on ‘love & compassion, giving and being of service’ with all that I do, rolled inside this paper, I found another piece of paper. This one featured a drawing of the never-ending knot, one of the eight symbols of Tibetan Buddhism. The text next to it said:

Somewhere online I read that “since all phenomena are interrelated, the placing of the endless knot on a gift or greeting card is understood to establish an auspicious connection between the giver and the recipient.” Well, I’m not exactly giving it away as a gift, however, it’s probably a smart idea to leave the never-ending knot drawing on the dashboard. Finding this symbol, seems like an excellent omen.

You can now see why I brought my coffee downstairs. I need some sips and some time to read and contemplate.
After my break, I tackled the car trunk. And oh la la, it’s full.

I found 20 magazines, and 4 bags with office supplies, women and children cloths that were destined for the First Nation’s women shelter that I still have to go to. There is also a planter box to donate to a friend who asked for one. I feel this car has one more big trip to make to distribute all.

The last item I found in the trunk was a steering wheel lock. I left it in the trunk. It is still brand new even though I’ve been given it years ago. The car comes with power locks plus it has an impressive alarm. In addition, f I feel encouraged to do so, I protect my car with Reiki energy. Or put differently: I’ve never needed that steering wheel lock. So, it will be a bonus gift to the buyer. Doing that is in line with the messages I’ve been receiving all morning, and giving it away feels really nice to me.

With the car empty (except for the donations), I was ready to started polishing away. With every swirl of the cloth, I affirmed that it became an even more beautiful car that someone else can fall in love with, and that I lovingly pass it along to whoever needs it.

Tomorrow I’ll get the paperwork organized, and then I guess it will be time to release the car. I will let you all know how long it takes me to sell the car, effortlessly.

The morale of the story? I let myself be guided by symbolism and signs to create meaning and enjoyment in all my experiences. Doing so offer insights into how to interprete the current step I’m taking and how to go about taking the next step.

In this case, I received many signs and symbols. My main ‘take away’ was the ‘Om Mani Padme Hum’, reminding me to not be too caught up in worldly possessions. The mundane practice of selling the car can be seen in the much larger spiritual picture of becoming one with the Buddha.

\ * Tt appears they have moved their website to http://www.gaywaproject.net/ and that the source of my wonderful pamphlet was a charitable organization that provides food & shelter for poor elderly women in Tibet.