‘Bloggers Unite for Basic Human Rights’, and we’re participating. As ‘We Are One World Healing’ is a ‘good news’ website, I’ll highlight a horrible issue that seems to be improving: Death penalty in China.

China is a superpower, whether we acknowledge this or not. Moving from a state of power to a state of freedom for all, is what we hope for in China. One of the issues is freedom from fear.

“Around 68 crimes can be punishable by death in China, including non-violent offenses like tax fraud, embezzling, taking bribes and some drug crimes”, Amnesty International reports.

“Amnesty International believes there is likely to have been a significant drop in executions since the Supreme People’s Court review for all death sentences was restored in January 2007.” 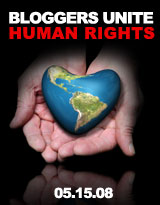 The only way to verify any drop in the number of executions is to publish the death penalty statistics. China needs to continue this reform by introducing greater transparency, to ensure that the families and lawyers of those sentenced have access to them and to information about their cases.”

Key facts
* 137 countries have abolished the death penalty in law or practice.
* 60 countries retain and use the death penalty, most often as a punishment for people convicted of murder.
* At least 1,252 people were known to be executed in 24 countries during 2007. The true figure was certainly higher.
* 88% of all known executions in 2007 took place in China, Iran, Saudi Arabia, Pakistan and the USA.

A downward trend
Soon after its foundation in 1961 Amnesty International began sending appeals to prevent the execution of prisoners of conscience. Over time, its opposition to the death penalty has broadened to include all prisoners, regardless of the crimes of which they have been convicted.

Progress has been dramatic in the last few decades. In 1977 only 16 countries had abolished the death penalty for all crimes. Thirty years later, that number had grown to 90.

Working together
Amnesty International conducts an ongoing program of work against the death penalty, including campaigns in individual countries, working in cooperation with civil society.

It is a founding member of the World Coalition Against the Death Penalty (WCADP) – a coalition of more than 40 human rights organizations, bar associations, trade unions and local and regional authorities, who have joined together in an effort to rid the world of capital punishment.

How You Can Help

We help stop human rights abuses by mobilizing our members and supporters to put pressure on governments, armed groups, companies and intergovernmental bodies

There are many ways you can help, including making a donation, joining Amnesty International and taking action.