Protect Yourself from Negativity with Black Tourmaline

Black tourmaline is said to protect from all kinds of negativity, ranging from electronic radiation from TVs and computers, to negative people, psychic attacks, past lives and spells. Black tourmaline seems to bring grounding in your life, and to balance our bodily systems for health.

Tourmaline has been uses as a gem for over 2,000 years.  In physical terms, tourmaline is a borosilicate mineral of complex and variable composition. Tourmaline is the name given to the group of related minerals that all have essentially the same crystal structure, but that vary significantly in chemical composition and in some of their physical properties.

Another name for tourmaline is ‘schorl’. Tourmaline can be found in many countries such as the US, Brazil, Burma and Zimbabwe.

What is chemically special about tourmaline is that when it is heated, it obtains an electric charge. When charged, it attracts small objects such as hair or small pieces of paper. It is this unique property that has resulted in scientific and industrial uses of tourmaline.

Black tourmaline has strong protective properties, and can offer shielding from harmful emissions from electronic equipment, from psychic attack and it is said to protect from magic spells and curses in present and past lives.

Tourmaline has been considered to heal physical and mental disorders as well as prevent death. It already was attributed such qualities back in the Middle Ages.

Black tourmaline has been known for its strong balancing properties to realize physical healing and health. It is said to aid a number of body systems, including the endocrine, immune and autonomic nervous systems.

How does the black tourmaline work? It help your body towards homeostasis – the state when your body is working perfectly and everything is in balance.

This mineral is considered to be an effective pain reliever, and can be used in the treatment of arthritis and back disorders.

For mental/emotional healing, tourmaline appears to help enhance concentration, inspiration and sensitivity.  Further, it has been used to stimulate a proper balance between the left and right sides of the brain.

Black tourmaline is considered to also help in all kinds of other areas of our lives where a state of equilibrium is required, such as between play & work, ease & pain; or, inner- & outer- consciousnesses.

One of my sources referred to people in the healing profession specifically, stating that black tourmaline can be useful in balancing the healing and creativity energies required in the art of healing.

As its strong back color indicates, black tourmaline is mostly associated with the root or base chakra. As such, it can be used to gain grounding.

For example, in your healing practice, you can give your clients a black tourmaline stone to hold for a few minutes after their healing treatment, as tourmaline is said to rapidly dispels any ‘spacey’ feelings post treatment. You can, of course, also use it yourself, after your meditation, or early in the morning, to quickly wake up.

Having said this, black tourmaline seems to absorb and dissipate negativity related the other chakras as well.  It is said to dispel a negative frame of mind (3rd eye chakra); dissolve negative emotions (heart chakra); and to help being free from irrational fear and panic (solar plexus chakra).

Black Tourmaline, as a Lucky Stone

I have read that rubbing black tourmaline brings luck and happiness. When rubbed, it becomes charged with magnetic electricity and the luck intensifies.

Healing Tourmaline in Other Colors

The name ‘Tourmaline’ stands for ‘multi-colored’ in Sinhalese, and indeed, Tourmaline occurs in many colours besides black.  Other colors and color combinations of tourmaline are: pink, water melon (i.e. pink & green), green, and blue.  What is considered ‘pink tourmaline’ seem to actually range from light fluorescent light brown to an intense fuchsia pink to purple.

It is a stone that is found in abundance, and only its flawless, translucent varieties are cut as gemstones.  Particularly the pink and watermelon tourmaline gems are really exquisite! However, all healing stones work: rough ones, shiney, tumbled ones, as well as those cut into marvellous gems. 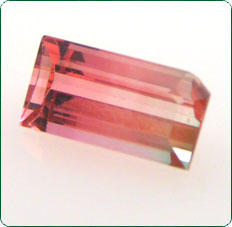 The color of the tourmaline reveals its healing properties.

There are a few books in my online library that I frequent often for crystal therapy.